Dubai, 8 December 2019: Dubai Financial Market (DFM) today hosted a bell ringing ceremony to celebrate the successful issuance and listing of the new shares issued by Emirates NBD, through the Rights Issue. Hesham Abdulla Al Qassim, Vice Chairman and Managing Director of the Bank rang the market opening bell in the presence of His Excellency Essa Kazim, Chairman of DFM as well as senior representatives from both sides. 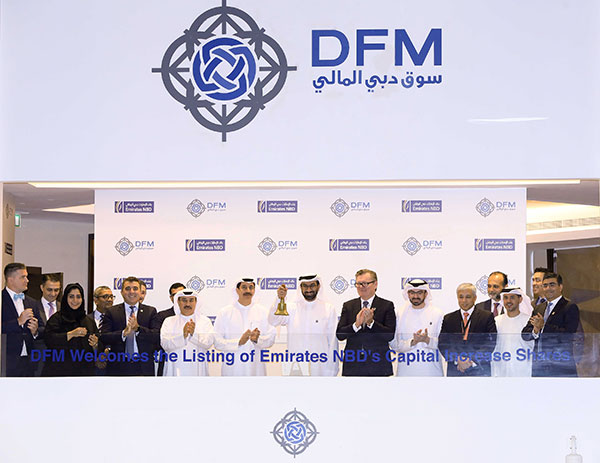 Emirates NBD's Rights Issue attracted strong demand from investors in the UAE and globally, which is a clear testament of their confidence in Emirates NBD, as one of the leading banks in the UAE and the region. It also underlines their confidence in DFM, as an efficient fund-raising platform to finance growth strategies as well as to strengthen links between its listed companies and the investing community.

The issuance was oversubscribed by 2.8 times with a total funded commitments of AED 18 billion, including AED 11 billion from non-UAE investors, equivalent to 62.6% of the total commitments.

Emirates NBD has issued 758.8 million new shares with an issuance price of AED 8.5 per share in order to increase the capital to AED 6,316.59 million. Emirates NBD plans to use the funds raised to further strengthen its capital base and to support future growth of its business.

Commenting on this development, Hesham Abdulla Al Qassim said: “The capital increase is a milestone in our continuous endeavor to strengthen Emirates NBD’s prominent position as a key player in the economic development of the UAE and beyond. Undoubtedly, the outstanding success of Emirates NBD’s Rights Issue, underlines the confidence of local and international investors in the Bank’s business model and promising outlook.”

“We would like to extend our sincere thanks to long committed and new shareholders alike for their strong support that led to the great success of this issuance. Our sincere thanks are also extended to the DFM team for their significant contribution to the seamless implementation of the capital increase through its innovative eIPO platform, enabling the swift listing and trading of the new shares,” Al Qassim added.

H.E. Essa Kazim said: “Building upon the longstanding relationship with Emirates NBD as one of the first institutions listed on the DFM, we are delighted to welcome the listing of the bank’s new shares. This step reaffirms Emirates NBD’s confidence in DFM’s world-class infrastructure, innovative issuer services as well as its large and diversified investor base. Such competences are reinforcing DFM’s leading position as the market of choice for companies looking to implement new IPOs or capital increases. With this successful issuance, the total value of raised funds via DFM through its momentous journey reached AED 76 billion, a clear evidence on its vital role as an efficient fund-raising platform to finance growth strategies and support the economic development plans in the UAE.”

It is noteworthy that the new shares were added to investors’ accounts on DFM on Thursday, 28 November 2019. Moreover, 72.5 million Rights were traded on the DFM between 3 and 14 November 2019, with total value of AED 192 million during the Rights Issue process.

Emirates NBD Capital PSC acted as Lead Manager and Bookrunner in respect of the Rights Issue.