On 19 March, 2014 the Middle East Pre-paid Cards Summit was held by Cards International and sponsored by Visa International at the Conrad Hotel. The event was attended by over 140 delegates and top line speakers, making it one of the biggest summits ever held till date. Emirates NBD received top honours for the 'Best Prepaid Card Marketing Campaign 2013' for their Emirates NBD Manchester United Co-branded Prepaid Card.

Cards International is the world's premier cards briefing service that specialises in providing global news and in-depth analysis for the cards and payments service sectors for over 20 years. 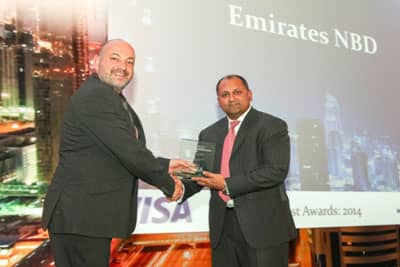 The Manchester United Prepaid Card offers football fans in the UAE a host of rewards such as an all-expense paid trip to Old Trafford to watch Manchester United in action, discounts of up to 30% at over 1,500 restaurants across UAE and much more.