Dubai, April 02, 2014: Emirates NBD, a leading bank in the region, today announced that it has won the ‘Best Sports Marketing Campaign' award at the recently held Sports Industry Awards (SPIAs), a leading sports-dedicated awards ceremony in the Middle East. At the awards ceremony, Emirates NBD walked away with a Bronze award in recognition of developing and executing a highly successful marketing campaign after the bank entered into a historic partnership with Manchester United last year.

The Sports Industry Awards is organized by Sport360°, a leading sports publication in the UAE, to honour the finest sporting campaigns and events in the Middle East. The winners of these prestigious awards are shortlisted based on post campaign success demonstrated through quantifiable reach and impact on target audience in terms of brand awareness, market share, increased sales and behavioral change measured against objectives.

Emirates NBD entered into the partnership agreement with Manchester United in September last year, providing customers with the chance to win once in a lifetime opportunities, including trips to Old Trafford. The partnership saw the bank unveiling the Emirates NBD Manchester United co-branded credit and prepaid cards, accompanied by a series of marketing initiatives offering priceless experiences for cardholders. The bank communicated this by a 360 marketing campaign that covered all the major touch points in the physical and digital space. 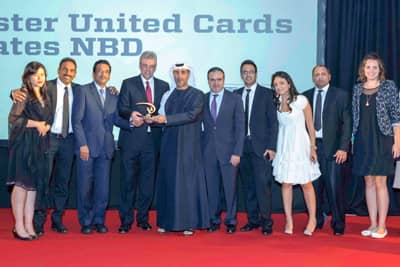 Since the launch of the partnership, Emirates NBD offered 60 customers the chance to win full-expense paid trip to watch the club live in action last year, in addition to a Chevrolet Camaro that was given away to one lucky customer. Other attractive offers and privileges allowed fans to attend the team’s training sessions, visit Manchester United museum, dine at the themed Red Café, as well as watch a match at the Old Trafford stadium. Apart from these outstanding benefits, cardholders also had the opportunity to win official Manchester United signed memorabilia.

Speaking on the sidelines of the award ceremony, Saif Al Mansoori, Deputy Head – Group Marketing and Branding, Emirates NBD said: "We are honoured to be awarded Best Sports Marketing Campaign, which reflects the strength and diversity of our marketing campaigns. Through our partnership with Manchester United, we have been able to reach out to over 875,000 UAE-based club fans across the UAE, and in turn help them to become more financially responsible. Football is one of the most popular sports in the world, and Manchester United is one of the most widely supported teams globally, which gives the chance to connect with our customers on a personal level."

First of its kind partnership will transform financing for property rentals

Emirates Islamic, one of the leading Islamic financial institutions in the UAE, announced its financial results for the quarter ending 31 March, 2020. The Bank reported a net profit of AED 155 million for the first quarter of 2020.