Dubai, February 16, 2015: Emirates NBD Asset Management Limited, the asset management arm of Emirates NBD, a leading bank in the region, has once again received industry recognition for its stellar performance and research-driven approach to fund management.

The company bagged a triple win at the sixth annual MENA Fund Manager Performance Awards 2015, recently held in Dubai, UAE. Emirates NBD Asset Management (Emirates NBD AM) was named UAE Asset Manager of the year, for the third consecutive year, and was also awarded Fixed Income Fund of the Year for the Emirates MENA Fixed Income Fund. This fund has a 5-year track record in March 2015 and is over USD200 million in size. In addition, the company won Real Estate Fund of the Year for the Emirates Real Estate Fund, which has a 10-year track record this year and is USD 360 million in size

The winners were selected by representatives from MENA Fund Manager, a panel of leading institutional and private investors and industry experts, and judges based their decision on fund performance as well as qualitative and structural criteria. The MENA Fund Manager Performance Awards recognise the region's leaders in fund management annually at a distinguished ceremony, which is the single largest gathering of fund managers in the industry's calendar. 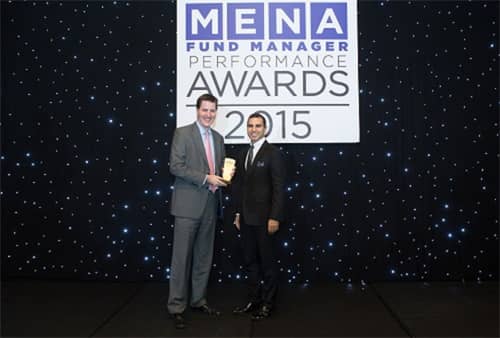 "We are delighted to be awarded UAE Asset Manager of the Year for the third year running and we are also very proud to have won two additional awards for our funds. With our strong in-house investment expertise, driven by our disciplined research-centered approach to fund management, we aim to continue to service the complex requirements of investors in the UAE and abroad," continued Marshall.

The triple win at the MENA Fund Manager Performance Awards 2015 is the latest in a series of industry accolades received by Emirates NBD AM. Some of the recent awards include: ‘Fixed Income Manager of the Year' and ‘CEO of the Year' at the 2014 Global Investor/ ISF Investment Excellence Awards; ‘Best Investment Management Company 2014, UAE' at the World Finance Investment Management Awards 2014; and ‘Best Regional Fund Manager' at the Banker Middle East Industry Awards.