"Back to Reality": Emirates NBD announces investment outlook for 2020

Dubai, 02 February 2020: Emirates NBD, one of the leading banks in the region, has released its global investment outlook for 2020.

Themed, “Back to Reality”, the 2020 outlook was revealed to media by Maurice Gravier, Chief Investment Officer, Emirates NBD Group. 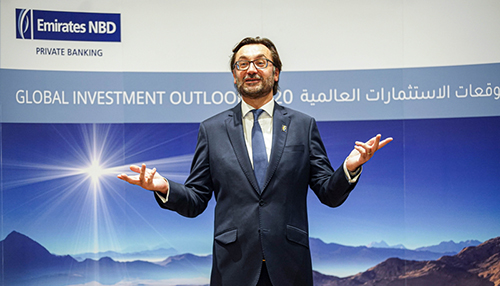 Speaking at the media briefing, Gravier commented: “After a spectacular 2019, propelled by monetary easing meeting excessive pessimism, we expect markets to come back to the reality of fundamentals.”

The global economic backdrop is resilient, with growth expected to be close to that of last year, while inflation remains subdued, Gravier said. The effects of last year’s rate cuts will be felt, supporting consumer spending, helping manage the enormous amounts of debt in the system, and providing oxygen to other central banks especially in emerging economies.

On the flip side however, valuations are “too elevated, especially in developed markets, to expect any further expansion,” he noted. “In terms of positioning among the global investors’ community, the excessive pessimism of last year has been replaced by a tepid neutrality, which is less favourable for markets.”

“To put it short: the fundamental scenario is benign but it is fully priced-in, which limits upside potential, and creates vulnerabilities to any negative surprise,” Gravier concluded at the briefing, adding that Emirates NBD expects its allocations to deliver single digit performances in 2020, close to their long-term expected returns and to the nominal global GDP growth.

The annual Emirates NBD CIO Outlook is an advisory blueprint covering investment opportunities and key global economic indicators and in-depth financial market insights, based on which Emirates NBD’s team of advisors, strategists and analysts make recommendations on financial transactions and investments to the bank’s qualified clients.

: Emirates NBD, a leading bank in the region, today announced that it has been named the 'Best SME Bank of the Year - 2019' at the prestigious International Finance Magazine (IFM) Awards

Emirates NBD, a leading banking group in the region, has launched AUTOSWAP, a first-of-its-kind auto loan buyout product that provides a convenient and hassle-free financing solution for individuals seeking to buy used cars.

Emirates NBD, a leading bank in the region felicitated 26 staff members for completing 25 years of continuous service during a ceremony held at the Emirates NBD headquarters

"Back to Reality": Emirates NBD announces investment outlook for 2020

Emirates NBD, one of the leading banks in the region, has released its global investment outlook for 2020.