Emirates NBD recognised by HH Sheikh Mansoor bin Mohammed, Chairman of The Higher Committee for the Protection of the Rights of Persons with Disabilities (People of Determination)

Dubai, 22 May 2017: Emirates NBD, a leading banking group in the region, was recognised by The Higher Committee for the Protection of the Rights of Persons with Disabilities (People of Determination), chaired by His Highness Sheikh Mansoor bin Mohammed bin Rashid Al Maktoum. The bank was appreciated for its efforts in disability mainstreaming and initiatives that focus on the financial, educational and workplace inclusion of people with disabilities (people of determination) in the UAE. 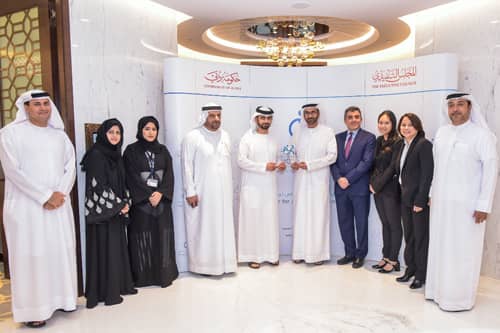 The award was received by Hesham Abdulla Al Qassim, Vice Chairman and Managing Director, Emirates NBD, who said: “Emirates NBD is delighted to receive this recognition from the prestigious Higher Committee for the Protection of the Rights of Persons with Disabilities (People of Determination), at the Executive Council of Dubai, as this is a distinguished acknowledgement of the bank’s efforts to advocate for the inclusion people with disabilities (people of determination) in financial products and services, education, and the workplace. We also congratulate the Higher Committee for the great work it has been doing under the ‘#MyCommunity’ initiative, that aims at turning Dubai into a disability-friendly city by the year 2020 through projects and initiatives that promote the participation and inclusion of persons with determinations of different disabilities in the community, eliminating all obstacles that may stand in the way of them positively engaging in their environments, as capable individuals of society.

“Emirates NBD has been deeply inspired by ‘#MyCommunity,’ launched by His Highness Sheikh Hamdan bin Mohammed bin Rashid Al Maktoum, Crown Prince of Dubai and Chairman of the Executive Council of Dubai, to turn Dubai into a disability-friendly city by 2020. As a homegrown bank in the UAE, we are proud to align our efforts to this initiative, as we continue to make our branches universally accessible, in line with the objective to turn Dubai into a city for everyone,” added Al Qassim.

Record half for Retail lending and customer transactions

Emirates Islamic's net profit jumped 23% to AED 701 million for the first half of 2022 on higher funded and non-funded income with a significant reduction in the cost of risk reflecting improved business sentiment.

Program to nurture a pool of future-ready interns by 2025